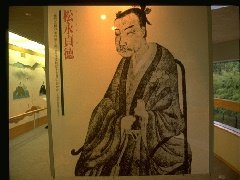 He was a friend of Hayashi Razan 林羅山 (1583 - 1657)
Hayashi Dōshun, a Japanese Neo-Confucian philosopher, serving as a tutor and an advisor to the first four shoguns of the Tokugawa bakufu.
© More in the WIKIPEDIA !


quote
Matsunaga Katsuguma Teikoku, also called Shōyuken, or Chozumaru (born 1571, Kyoto—died Jan. 3, 1654, Kyoto), renowned Japanese scholar and haikai poet of the early Tokugawa period (1603–1867) who founded the Teitoku (or Teimon) school of haikai poetry. Teitoku raised haikai—comic renga (“linked verses”) from which the more serious 17-syllable haiku of Bashō were derived—to an acceptable literary standard and made them into a popular poetic style.

Teitoku was the son of a professional renga poet, and he received an excellent education from some of the best poets of the day. After making the acquaintance of the Neo-Confucian scholar Hayashi Razan, Teitoku began giving public lectures on Japanese classics. In about 1620 he opened the Teitoku school in his home; at first he concentrated on educating children, but gradually he became more interested in tutoring aspiring poets.

Throughout this time he had been composing poems, primarily serious waka and renga but also lighter haikai. Although reluctant at first, he allowed one of his students to publish a number of his haikai in the anthology Enokoshū 犬子集 (1633; “Puppy Collection”). This volume established him as the leading poet of the early to mid-17th century, and numerous poets were inspired to compose haikai. Several other collections of his poems were published, including Taka tsukuba (1638) and Shinzo inu tsukuba shu (1643).
Teitoku also set down the rules he had formulated for writing haikai in Gosan (1651).
source : www.britannica.com


The Teimon School was known for its use of colloquialism and puns in haiku. But he insisted on the use of Chinese words too (kango 漢語).

(tanabata is the star festival on the night of July 7.)
WKD : Star Festival (Tanabata)


The poet name of Teitoku was Choozumaru 長頭丸 Chozumaru, a name quite familiar for Matsuo Basho and all haikai poets. Basho belonged to the "Teimon school of haikai", but he never met Teitoku in person.
Chozumaru "Boy with a long head" reminds the normal reader more of the name of a young boy, but not of a grown-up.

There was also a famous portrait of
Soogi 宗祇 Sogi （1421―1502), a renku master of the Muromachi period. It is said to have been quite close to the facial features of the master.
But it comes with the following inscription

Though it seems
to show me,
I find envy
the old man in the picture
who knows not the world's sadness!

a name for a boy -
the round hood of an old man
I never met
Tr. Gabi Greve

Written about 貞亨元年, Basho age 41 or later.
A pun with the Chinese characters : 長頭丸 - 丸頭巾. 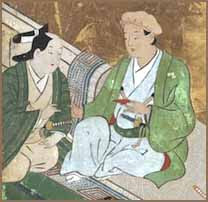